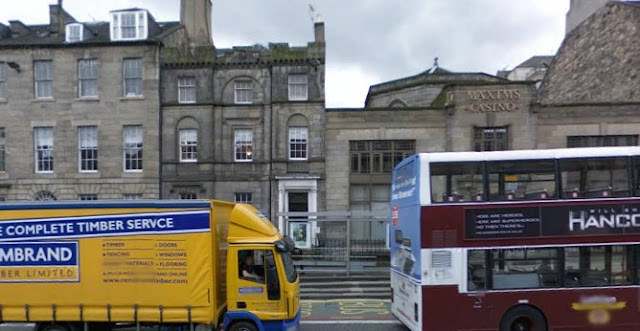 A history post rather than an art one for a change. St Paul’s and St George’s Church in Edinburgh (pandgchurch.org.uk) used to be two churches — you can probably guess what they were called. After the small congregation of St George’s moved across the road into the big building of St Paul’s, their little chapel was later demolished. I’ve finally worked out where on York Place it used to be: its here, where the casino is! But the Rectory at no.7, which adjoined it on the left and was built at the same time, survived. It looks like a classical georgian house until you look closely. There are ‘Gothick’ crenellations on the roof, ‘Gothick’ clustered columns round the door, and ‘Gothic’ cruciform arrowslits (!) on either side of the second floor windows. As an attempt at making a building look Mediaeval it is not, to our eyes, a great success, with its round arches and its regular rectangular windows. But in 1794 there wasn’t anything better around.

A demolished architectural mishmash of a chapel might seem a bit of a footnote in cultural history, except that the Rector for whom it was built, Alexander Cleeve, was the tutor of Walter Scott, who had just begun to practice as an advocate when St George’s was built. Whereas Edinburgh Gothic went off in a scholarly direction, Scott ran away with the fantasy to weave wonderful works of fiction, and a house, Abbotsford:

(I hope Travel Destination Pictures will forgive my borrowing their picture if I tell you that they have this and lots of other lovely photos here.)

In Abbotsford, Scott invented the style known as ‘Scottish Baronial’ which was used to design pretty much every tenement in Edinburgh and Glasgow for the whole of the nineteenth century. Alexander Cleeve, sticking crenellations, clusterings and cruciforms onto his Georgian House, might have a lot to answer for!